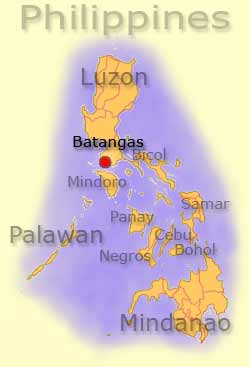 An important seaport and trading center, Batangas City has the largest seaport in the CALABARZON Region (Cavite-Laguna-Batangas-Rizal-Quezon) that would rival the international seaport of Singapore. The primary entry point of goods coming from the Southern portion of the country and elsewhere in the world is the Batangas International Port, which is an alternate port of Manila. Right now, this coastal city is classified as a Regional Growth Center and has been reported as one of the country’s top performing “mid-sized cities” by various institutions like the Asian Institute of Management Policy Center, United States Agency for International Development, Asia Foundation and the German Technical Cooperation

Batangas City started as a settlement in 1581 along the banks of the Calumpang River, where plenty of large logs called “batang” by the native settlers were afloat. Because of this, they called their settlement “Batangan,” which was modified to “Batangas” in 1601. It has been the capital and administrative center of the province since 1754, and in 1969, it was made into a city by Republic Act No. 5495.

Long before the arrival of the Spaniards, Batangas was already a large thriving population center that carried on trading activities with China since the Yuan Dynasty until the first phase of the Ming Dynasty as well as with Japan and India in the 13th up to the 15th centuries. Many Batangueños trace their roots to ten Bornean datus and their people who sailed across the seas to Panay Island then all the way down to Lake Taal where they set up a Malay settlement that spread further down to Lipa, Balayan and Batangas. Archeological discoveries in Batangas reveal a high level of civilization with Bornean and Indian influence reflected in ancient pottery as well as evidence of the existence of a religion.

When Batangas is mentioned, what immediately comes to mind is its most famous product—the “balisong,” or fan knife, one of the ancient weapons of the mystic art of Kali dating back to 800 AD. Balisong means “broken horn” derived from the Tagalog words “bali,” meaning broken and “sungay” which means ”horn” referring to the handle which is made of a water buffalo’s horn. The sharp blade is made of tempered steel that folds back into its handle, making it extremely portable–and deadly. Anecdotes abound that one should never cross a Batangueño because he always carries the deadly knife in his pocket. But if you immerse yourself into the culture of Batangas, you would find the Batangueños warm and hospitable right down to the core. More often than not, if you are their guest, they will feed you more than what they eat and would greatly appreciate any effort that you make just to be one of them.

Because the province is located in the so-called “coconut country” composed of Laguna, Batangas and Quezon, where the raw material for making the famed 90% proof “Lambanog” abounds, most Batangueños—both men and sometimes, women, are fond of drinking this local version of moonshine juice. Sugar is also aplenty in the city because of the presence of the biggest sugar refinery in the Philippines. After a particularly heavy drinking session, Batangueños love to sip a steaming cup of strong brewed coffee called “kapeng barako,” or “stud coffee.” Batangas used to be the largest coffee producer in Asia, and steps are currently being taken to increase production to regain that title.

What to See and Do in Batangas

If you are in Batangas and don’t dip into the sea or lake, you have certainly wasted your trip because you have just missed seeing one of the most spectacular underwater worlds you will never find anywhere on the planet.

Anilao: Just a few kilometers from the city is the municipality of Anilao located on the west side of Calumpan Peninsula approximately 20 kilometers west of Batangas City. The dive sites which are ideal for observing marine life are concentrated on the southwest side of the peninsula and the northwest point of Maricaban Island. For the more adventurous, night dives are unmatched for the number of unusual creatures that you will see. The best dive site in this place is the coral-covered cathedral which is particularly spectacular at night. And, if you would like to see real pretty coral gardens and a vertical wall, try Sepok, which one of the most fantastic dives in the area.

Taal Volcano and Taal Lake: The center piece of attraction of the Southern Tagalog Region is Taal Volcano and Taal Lake in Batangtas. The volcano is the world’s smallest, yet is known to be temperamental. What makes it one of the wonders of the world is that the volcano is within an 8.8-kilometer islet that is within a 27-kilometer lake inside the crater of an extinct volcano. The volcano which is ideal for trekking by the adventurous nature-lover is accessible by boat from the towns surrounding the lake. If you feel up to it, you can rent a kayak, catamaran or a small sailing dinghy and take the family kayaking or sailing on placid Taal Lake.

Go on a 4X4 Adventure: A great way to enjoy Nature up close and personal is to get off the well trodden path and blaze your own trail through the streams and jungles of Taal Island aboard a 4×4 which can be rented in many places around Batangas.

Where to Eat in Batangas

Batangas is in a country where people eat at least five times a day. On a regular day, Filipinos go on a ritual of five small but delicious meals starting with a heavy breakfast followed by a morning merienda, or 10AM snack; lunch; afternoon merienda, or 4 PM snack; and, ending with dinner. Because of the Filipino’s propensity to eat, different food establishment abound in Batangas ranging from fine dining to fast food to low-end eateries that offer a variety of food recipes culled from the Philippines’ rich mix of Oriental and Western cultures.

Robusta Bar And Pastorelli at Hotel Pontefino: These two restaurants at the Hotel Pontefino reinvent local Filipino dishes to suit the global palate of the expat who misses real international cuisine or a balikbayan who craves for the best Filipino specialty dishes. When you are in Batangas try these restaurants and ask for any of the following specialties: Juicy and tender Batangas Bulalo best served with Indian black rice; Binangeng na Maliputo, a species of fish freshly caught from the fresh waters of Taal Lake seasoned with salt and pepper and grilled over lava rocks; Sinaing na Tulingan in Pasta, a cross between the favorite dish of the common folk which shredded steamed tuna combined with pasta, olive oil, shrimps and button mushrooms; and, Adobong Puti, a delicious pork recipe that is braised in vinegar, pepper and fish sauce.

The Tree House Restaurant: If you are cruising on the highway going down to the new Batangas Port, keep your eyes peeled on the right side of the road for this unique restaurant that offers both local and international cuisine. There is a tree house, actually a “kubo” or hut, and a mini zoo with a small collection of birds and animals. Some popular local delicacies is the “tawilis,” or “Sardinella tawilis” a species of freshwater sardine that is endemic to Taal Lake, that are freshly caught, fried and served crisp; Fried Longganisa (pork sausage), Tapang Taal (beef jerky) and Atchara (pickled veggies); and, Kilawin, (similar to the Japanese sashimi) fresh fish soaked in vinegar, lemon with lots of chopped onions, garlic and pepper which goes well with a cold glass of Colt 45 or Red Horse beer or if you are lucky enough, a shot of 90% proof Lambanog while waiting for your food. You can cap that heavy meal with a steaming hot cup of “kapeng barako” or “stud coffee” and feel like a real honest to goodness Batangueño.

Jollibee: If you are on a hurry or would like to chow down a quick budget meal, you can grab a seat in one of the most popular fast food chains in the country. There is a Jollibee at the SM Mall with its ubiquitous bee logo. It is more popular among Filipinos because its food was specifically prepared to meet their taste. Why don’t you try its fried chicken, which is very similar to Mac Donald except that the gravy is a bit sweeter and spicier.

Where to Stay in Batangas

The reputation of Batangas as a destination and as a jump-off point to Puerto Galera and other parts South has resulted in the growth of hotels and a number of bungalows and resorts that offer rest and recreation at ridiculously low prices by international standards. Whether you are a Metro Manila urbanite out for a weekend of fun, a tourist or investor checking out the city’s industrial parks, you will find accommodations to meet your everyday needs.

Hotel Pontefino: This is the newest boutique hotel in Batangas City which offers the comforts of a Filipino home and the luxury of an elegant hotel. After your activities for the day, you will sleep soundly in any of its premium room or suite which feature air conditioning, telephone, cable TV, coffee/ tea maker, room safe and Internet access for only P4,100.00 converted at current forex rates.

How to Get to Batangas

Manila to Batangas and Back: Batangas is about 2 ½ to 3 hours from Manila by bus or car. The commercial busses that ply the route are BLTB, JAM, Tritran, Batangas Express Liner, Triftman Liner, Binan Trans., ALPS and CJC Transit which pick up passengers at Pasay terminal, Plaza Lawton in Manila or Cubao Bus Terminals. The bus fare is about P350.00 to P500.00.

Cebu to Batangas and Back: To reach Batangas from Cebu, you can either fly from Cebu to the Manila Domestic Airport in Pasay or sail from Cebu to Manila. Approximate cost of a round trip plane ticket is P4,000.00 – P5,000.00 while a round trip boat fare is approximately P3,000.00 – P4,000.00. Once you disembark at the Manila Domestic Airport or Pier Area, it is best to take a taxi cab and ask to be taken to Pasay Bus Terminal or Plaza Lawton where you can take the bus bound for Batangas. The taxi fare is approximately P200.00.

Dumaguete to Batangas and Back: To reach Batangas from Dumaguete, you can fly from Dumaguete to the Manila Domestic Airport in Pasay City. From the airport, flag a taxi cab and ask to be taken to Pasay Bus Terminal where you can hop on a bus bound for Batangas. The taxi fare is approximately P200.00.