A commanding historical structure built in the year 1811, the Dumaguete Bell Tower is the oldest known Belfry in the province. Standing next to the majestic St Catherine of Alexandria Cathedral, the tower is above the nearby buildings like a deacon. Its purpose was to inform local citizens of daily mass schedules. It also served as a watchtower for forthcoming attacks by Moro pirates coming from Mindanao. 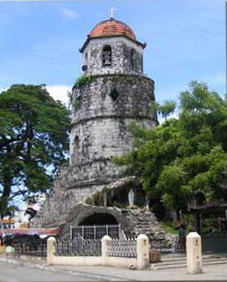 Located along the main Perdices Street right next to the St. Catherine of Alexandria Cathedral fronting the Rizal Park, it is an imposing stone structure that certainly calls for the attention of many passersby. Because of its antiquity and authenticity it may well look out of place in the midst of the city’s modern day activities. But although it has been restored and given some additions over the years like the garden and grotto of Our Lady of Perpetual Help at its base, it has retained its ancient look right down to the now moss covered exterior walls.

In the year 1811 when Dumaguete was a place whose inhabitants were always threatened by Muslim marauders in search of slaves, the Bell Tower was then built to forewarn the locals of any incoming danger. It remains to be the oldest bell tower in the Visayas and is a very famous architectural landmark in the city. The tower is more than 200 years old, that’s why it gone through several restorations and given some additions which features the original structure.

This is just one of the evidences of the strong influence that the Spaniards had made on the Filipinos during their regime. A great majority of the city’s population is deeply Catholic, the very religion that Spain brought into our country.

Due to its proximity to the Dumaguete city public market and the downtown area, traffic around the Bell Tower tend to be heavy on the peak hours between 9 am and 5 pm. The place is generally always packed with people, milling about near its base. Devotees regularly light candles at the grotto area to profess their faith or to say their prayer requests. Some just stop over to pay a curious visit.

The St. Catherine of Alexandria Cathedral — a byword to the Dumaguete Belfry — is also another historical monument. It is the largest church in the city and was built the same year that the Bell Tower was. With a gilded and ornate altar, high ceilings and hanging chandeliers, the church is a grandiose display of traditional European architecture. The façade is also worthy of praise, having undergone a recent restoration in the year 2005. The brick stone pathway lends an old world feel, much appropriate for perhaps a lady with a Spanish lace veil over her head emerging from a horse drawn carriage. The cathedral is a work of art and still holds a lot of beauty. Quite a popular attraction in the area too, with locals and tourists alike visiting to pay their respects and take a few pictures. It has a rich history and one will have a glimpse of the past which becomes the foundation of its present society.