Considered to be one of the best and biggest universities in all of Asia, Silliman University has made Dumaguete a proud city. From its humble beginnings, it rose to the ranks and earned the title of being a “Center of Excellence” in the country.

Right in the heart of Dumaguete City is the internationally recognized Silliman University, established in August 28, 1901 by Protestant missionaries of the Presbyterian Church in the United States with the efforts of Dr. Horace B. Silliman thus making it the first Protestant school founded in the Philippines and the oldest American University in Asia.

Every year, Silliman University commemorates its Founder’s Day with a week-long celebration beginning with a traditional city parade. This event is one of the highlights of the year as the whole city joins in its festivities. Students, faculty members, locals, alumni and visiting guests flock to the gates of Silliman campus to be part of the merry making. 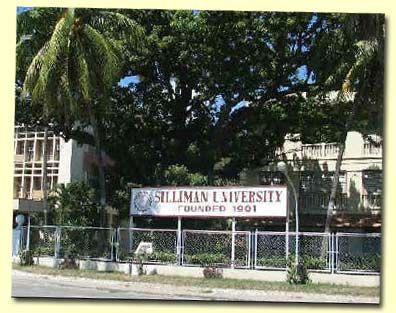 Silliman University was originally named Silliman Institute after its founder, Dr. Silliman. It began as an elementary school composed of only 15 all male students and having only the very basic amenities — several desks, a couple of tables and two chairs. The student population steadily increased as the years went on and in the year 1938, Silliman officially became a university. At present it holds a total population of 6,000 students and 500 faculty members.

The huge area of Silliman campus is a sprawling 610,000 square meters of prime land area dotted with full grown giant acacia trees. It has a state of the art auditorium for cultural shows & concerts, a museum, a huge library, an Olympic size swimming pool, archery range, tennis and pelota courts, football field, gym, chapels, a Protestant church, cafeteria, dormitories and faculty houses right within the university premises. Every college has its own building too.

The courses being offered in Silliman University are plenty and diverse ranging from College of Education, languages, agriculture to psychology to management and law. Silliiman has consistently topped Accountancy, Nursing and Physical Therapy board exams in the country. The College of Performing Arts has also produced great names in the history of music education. Silliman is also known as one of the best schools in Marine Biology, having its own marine laboratory to boot.

Silliman university has come a long way from its beginnings in 1901. It has kept up with the demands of high quality education and has been recognized by the Commission on Higher Education in the Philippines as being a Center of Excellence. It is also among the top ten schools in the BPI Science Awards for student achievers. Recently, the Silliman Information Technology College also received a 100% rating from the same commission.The College of Agriculture was also ranked third in the country, proving Silliman University is among the best.