This article from Michael O’Riordan’s column Outside Looking in was first published in the Dumaguete Metropost on the 2nd of September, 2018.

BALAMBAN, CEBU — I’m writing this while sitting on the veranda of a beachfront resort here in Balamban.

Vhie and I stumbled on this large resort quite by accident. It’s lovely, built in traditional bamboo style, and is wonderfully quiet, with no guests currently staying, other than us.

A light breeze floats in from the sea. The excited sounds of children playing drift over the air. Seventeen men, spread out over a large distance, individually cast small nets, bending to their task of catching fish. I wonder whether their families will be able to eat tonight if they catch nothing.

Apart from a slight swoosh as the nets are thrown, they silently repeat the daily work of past generations without complaint, and with nobility. Unlike the outer world, they are in complete harmony with their environment. They are guardians of their heritage.

Beyond the horizon, events are unfolding, about which they know nothing. With the stroke of a pen, these men’s way of life could be casually destroyed. But such is the way of the world where the poor are always pawns on the playing fields of the wealthy who grow materially richer, while indifferent to the consequences of their actions. And they are usually applauded, purified, often becoming beloved philanthropists. Carnegie, Pulitzer, and Gates are examples. Yes, Gates, who tried to legally rob his partner Paul Allen is now considered a great philanthropist. And he is, on the back of his vast fortune. 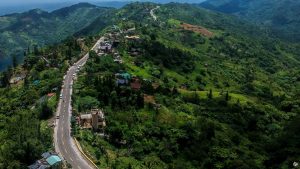 It was during this visit to Balamban that I gained valuable insights into Philippine family dynamics. We are here to celebrate Vhie’s mother’s birthday.

Since coming to live in Negros Oriental, I’ve been fascinated by the interaction among Filipino family members. Vhie’s family is probably no different from other Filipino families. At the party, there were sounds of laughing children, so many of them, I lost count. Vhie’s siblings would constantly challenge each other, then they would break into laughter while giving each other high-fives.

Her mother silently observed everything while also doting on her grandchildren. They are her achievements, her *raison d’etre*, her legacy. This is a lady who will never be famous nor written about. But she is much loved by her children, and highly-respected in her community. I would suggest she is recognized as a representative of many mothers in the Philippines who have overcome horrendous obstacles to see their children survive, then prosper. I’m reminded of the Philippine expression about family: *Joy for one is joy for all. Sadness for one is a sadness for all.*

Vhie had once lived a privileged life with all the trappings of middle-class comfort and an apparently loving father. Unfortunately, as often seems the case, her father had a wandering eye, and shortly after Vhies’ seventh birthday, he took off to permanently indulge his appetites elsewhere. There was an inevitable downturn in family finances. Vhie’s mother was left to provide for her eight children. She was suddenly forced to become the sole breadwinner. The challenges forced on her would have broken a lesser woman. At the party last Saturday, I had the opportunity to chat with several of Vhie’s siblings. They are a delightful, tightly-knitted group who adore their mother. What material wealth could be as valuable as that?

Speaking of birthdays, it will be Sunshine’s birthday on Sept. 3rd, and it seems a special age here. She will turn seven.

There’s no country like the Philippines I’ve ever visited or lived in that embraces the opportunity for a party. Recently, there were two national holidays in a span of one week. Vhie and I were driving to Dauin last week, and the traffic was horribly congested. Yes, another fiesta. There’s ALWAYS a fiesta, an excuse to party going on someplace.

In the Philippines, age seven is an important age. For a girl, it’s one of the two important birthdays; the other is at 18. I feel emotional when contemplating Sunshine at 18. It’s heartbreaking. I don’t want my little girl to ever grow up and experience life’s inevitable pain.

And I must accept my time is limited to guide her though childhood and adolescence. At 18, I’ll hopefully provide gentle winds for her to fly away to fulfill her destiny.

Age seven signifies the time when Sunshine can now be held more accountable for her actions. It’s also usually a time when the child moves from preschool to primary. Clearly, there’s a lot going on. At present, I have no idea how Sunshine will be told about her new responsibilities but will let you know what happened in a subsequent column.