The Province’s first town to the south of the capital may be its smallest, but it has some big things going for it. Its church of San Agustin, for one, has Oriental Negros’ tallest belfry, oldest main altar with gold-leafing and painted friezes, and a pipe organ from Zaragoza, Spain, installed in 1898 shortly before the revolution against Spain broke out in Oriental Negros. The only other pipe organ of similar provenance is found in Bohol. With its reasonably well-preserved complex including churchyard and convent (ca 1850), San Agustin of Bacong is one of the 26 colonial churches all over the country selected for restoration by the National Commission for Culture and the Arts.

Bacong’s historical importance is well-monumented: it is the birthplace of Negros Oriental’s hero and only Katipunero – General Pantaleon Villegas, aka Leon Kilat, whose birthday is celebrated every July 27. Barrio Isugan was site of a battle between Filipino and American soldiers.

Beginning the Second World War, Japanese Imperial forces were entered and occupied in Bacong in 1942. Filipino soldiers and guerrillas were encounter by the Japanese Imperial forces start the conflicts from 1942 to 1945 during occupation. When Allied forces liberated in Bacong was fought against the Japanese Occupation until the end in World War II in 1945. The general headquarters of the Philippine Commonwealth Army and Philippine Constabulary was active in 1945 to 1946 in Bacong during and aftermath in World War II.

Points of touristic interest are a string of beaches the length of the Bacong shoreline, sinamay hand looms, and the Negros Oriental Arts and Heritage (NOAH) which produces export quality stone craft furniture, jewel boxes and fashion accessories.

One of the town’s bigger barangays, San Miguel, marks its local fiesta with a unique Sinulog de San Miguel, where the archangel and his heavenly army are depicted battling the forces of evil. 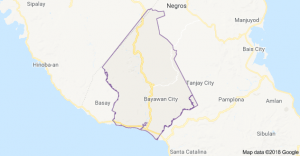 Bacong, officially the Municipality of Bacong, is a 4th class municipality in the province of Negros Oriental, Philippines. According to the 2015 census, it has a population of 36,527 people.Bacong was the hometown of the Visayan hero of the Philippine Revolution, Pantaleon Villegas, better known as León Kilat.