Negros Oriental’s lone municipality named after a native of distinction, Bindoy started out as barrio Payabon of Manjuyod. In 1949, President Elpidio Quirino separated it as the Municipality of Bindoy. Hermenegildo “Bindoy” Teves Villanueva (1876-1941) was, at various times, governor of Negros Oriental, congressman of the First District, Labor Secretary of the Quezon cabinet, and senator of the Republic.

Less than two hours’ drive from Dumaguete City, Bindoy is known as the hub of the Negros Oriental I Electric Cooperative, which energizes the northern towns. Its principal produce are copra, rice and corn, sugar cane, mangoes; and quantities of bamboo, pandan and romblon, tikog, buri, maguey and abaca to support cottage industries.

The annual Libod-Sayaw sa Bindoy, with streetdancing based on folk dances, is a colorful highlight of the town fiesta 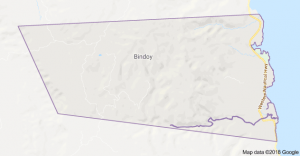 Bindoy (formerly Payabon), officially the Municipality of Bindoy, is a 3rd class municipality in the province of Negros Oriental, Philippines. According to the 2015 census, it has a population of 39,819 people.